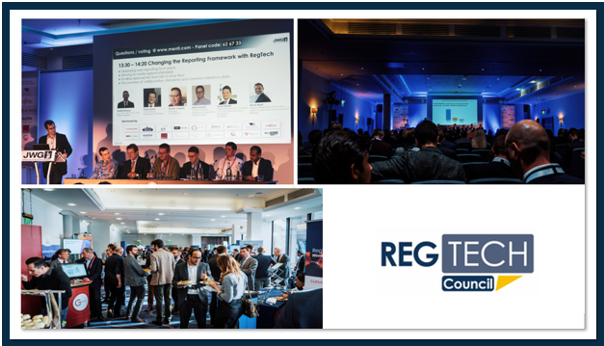 Regulators ready for action – are you a Council member yet?

Regulators, financial institutions and vendors had a very simple message for the RegTech Council on Friday: get on with it!

The risk of not having RegTech

Senior executives at JWG’s 7 February RegTech 2.0 conference saw IT obsolescence or legacy systems as the top risk for 2025, just above Environmental risk or climate change.

Regulator and regulated were in violent agreement on the only viable method to mitigating this risk: collaboration. And it cannot happen fast enough.

Technology has changed Finance far more than just shifting the way we submit data to the regulator. The method by which information is exchanged has opened an enormous opportunity: to share more persistent, meaningful and connected information about how the actors within the regulated systems behave.

RegTech is the lifeblood of good governance and our ability to agree on what constitutes ‘good RegTech’ will define how well we can control the system. Leading regulators in the UK, Europe and North America called for an urgent review of RegTech incentives, strategies and measures at a global level.

After years of experimentation with digitizing reporting, rule books and identification schema, they also demanded action on the tangible changes we can make now which will help define new RegTech standards.

Regulators are not suggesting that they become regulators of actual technology, but the industry can expect to see much firmer views on what kind of technologies they expect to see.

If the UK spends £5 billion each year to catch £1% of the money laundering, that is not good enough. If the industry is spending billions producing sub-standard data for the regulator, changes are required. If the way the handbook is written is no long fit for a digital world, it needs to be looked at.

This means that we require a new, global platform for Regulators, Firms and Tech companies to engage on:

Perhaps most importantly, a safe space is required to bring a problem to light and get to a solution. FS has a long history in failing to come together uncles it is forced to do so. There are cases where large risks have been solved by UN or G-20 mandate, but they are rare.

It is up to senior management to make it happen. All regulators want to improve the status quo, and many want to use RegTech to bring in innovation and ensure better outcomes for consumers. After a decade of reforms, firms recognise that their interests in most regulatory implementation topics are non-competitive and they have little to gain by going it alone.

Having validated its operating model with global regulators in Q419, the Council has a 2020 agenda that will help set the bigger vision while executing near-term AML programmes and sorting out a digital approach to regulatory reporting which deliver concrete return on investment.

Most importantly, the Council has the governance and global engagement model to scale to meet the demands of the sector and help with the strategies, priorities and plans.

The RegTech 2.0 Conference provided a clear mandate for the RegTech Council. 100% of the discussion amongst seven regulators and 12+ regulated firms supported the need for it across eight distinct subject panels – not a single dissenting view was raised.

We have the opportunity now as an industry to work together on the new RegTech standards that will introduce critical safety guidelines for how we deploy systems and identity data.

However, this is not a ‘nice to have’ for a few to develop while everyone free rides. The consequence of failure to engage will be having to follow someone else’s view of the taxonomy that does not take your input into account. It will mean rabbit holes of secondary priority are pursued with gusto while the more immediate priorities that would have made your near-term regulatory implementation programmes far more efficient and effective are left until the end of the decade.

Regulators have committed to put skin in the game but need to see the financial institutions engage in a meaningful way or that commitment will evaporate. The Council’s AML and OTC reporting programmes will deliver real return on investment for firms, but not if we don’t get the best and brightest on board now to start these time-critical efforts.

One regulator reminded us throughout the day of the hockey player Wayne Gretzky’s famous quote: “Skate to where the puck is going, not where it has been.”

Don’t look at your 2020 book of regulatory change and go it alone. Join your peers at the RegTech Council.

Dozens of financial institutions have the joining papers and are getting ready to start this quarter.