Let’s face it, getting data right is never easy and, with MiFID II’s drive for transparency kicking into high gear, the risks of getting reporting wrong are greater than ever. With additional reporting regime change coming next year, why not make your life easier and join in the industry RegTech collaborations in this space?

Trade and transaction reporting fines come with a number of potential costs – the Financial Conduct Authority (FCA) has previously charged a £1.50 fine per line of incorrect or non-reported data.

Now, consider how, every day, millions of transactions, reported by hundreds of trading venues, for thousands of different instruments (amounting to the 32 million data records currently on the Financial Instrument Reference Database (FIRDS)) have to tally across 65 reportable fields under MiFID II (this increases into the hundreds when taking into account EMIR and REMIT).

With this staggering amount of data and the probability for error so high, it is easy to see how fines have historically resulted in cheques being written for several millions of pounds.  With MiFID II’s implementation deadline just 40 working days away, the regulators are turning up the volume on the importance of reporting obligations.

Get it right … now

As Stephen Hanks, the FCA‘s manager for MiFID coordination, told an audience at an AFME conference on September 20, “when it comes to transaction reporting we are conscious of the fact that this is something we need to get right as soon as possible rather than to allow issues and problems to linger and fester.” His remarks are well-founded, especially when considering how a poll at the same conference showed that 46 per cent of respondents believed transaction reporting would be subject to the FCA’s first post-MiFID II thematic review.

According to Hanks, issues in trade and transaction reporting exist partly because of the systems that need to be adopted by firms – redesigning entrenched systems in large financial institutions can cost millions of euros and take several years to process effectively.  Take a broader view, and you will find issues pertinent across the entire reporting lifecycle.  Unaligned and overlapping requirements make reporting unnecessarily complex, costly and burdensome, negatively impacting the quality of data, making it challenging for the authorities to understand how financial risk develops in the financial system.

With these issues now broadly acknowledged by the industry – and even the regulators themselves – solutions have started to move beyond publishing whitepapers and hosting roundtables.

Regulators are now publishing their plans for 2018.  For instance, ESMA, in its 2018 Work Programme, lays out approximately half of its objectives relating to systems, tooling and data management.  With a quarter of ESMA’s staff working on reporting related objectives, the regulator expects to publish several guiding documents for different market participants and even strongly hints at amendments to EMIR in the coming year.

Whilst the extent of this revision is currently unknown, ESMA clarifies how it will be conducting ongoing work with the Committee on Payments and Market Infrastructures (CPMI) of International Organization of Securities Commissions (IOSCO) on revising reporting standards and increasing data quality.

From an American perspective, the US Department of the Treasury’s latest report to President Trump gives clear indication as to the direction of Swap Data Repositories (SDRs) and the trade reporting requirements under Dodd-Frank.  Similar to ESMA, the Treasury strongly supports multilateral regulatory coordination with non-US jurisdiction in order to avoid market fragmentation, redundancies, undue complexity and conflicts of law.  It also recommends that the CFTC standardises reporting fields across SDRs and harmonises requirements between the SEC and the CFTC, as well as between the US and the EU.  Committing adequate resources and time to the CFTC’s “Roadmap” review, as discussed in our previous articles, will be critical in this regard.  The Treasury also acknowledges concerns regarding the numerous types of reporting required for each transaction and the burdens that such requirements have imposed on market participants.

Get ready to retool, again

JWG’s analysis of trade and transaction reporting, carried out in 2016 (see Table 1), found that this problem is also apparent under the EU’s regulatory framework.  When looking at the crossover of reportable fields across MiFID II, EMIR and REMIT, it was found that 25 per cent of the fields are – in some way – talking about the same fact.

Under the current framework, some trade or transaction data have to be reported as many 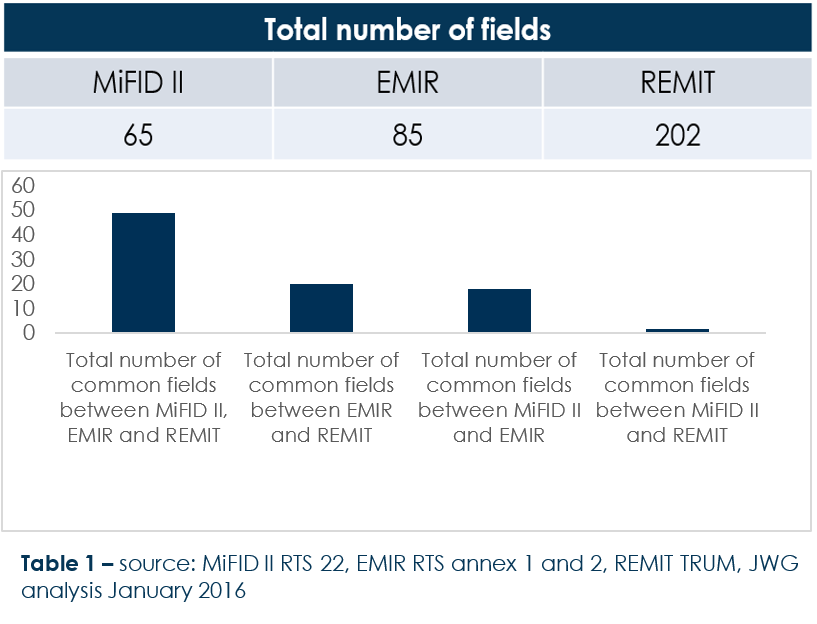 as three or four times through different channels, such as an Approved Reporting Mechanism (ARM) or a Trade Repository (TR), increasing the risk of non-compliance.  More worryingly, misaligned interpretations across several layers of regulatory obligations ultimately lead to a reduction in the quality of data for systemic risk monitoring purposes, negating the fundamental intent behind the rules.

In their paper entitled “Revision of the European Market Infrastructure”, the European Systemic Risk Board (ESRB) acknowledges the considerable obstacles to generating high quality data which, “can only be ensured if a fully-fledged and functional data quality framework is put in place along the whole chain of data collection”.  Their research shows how data provided by TRs under EMIR requirements is not harmonised and, in some cases, is not suited to macroprudential analysis.

Standards are being created to help, such as CPMI-IOSCO’s recently published Technical Guidance on the Harmonisation of the Unique Product Identifier (UPI).  Five years in the making, the institution envisions a system in which a unique UPI code would be assigned to each distinct OTC derivative product.  Global in scope and jurisdiction-agnostic, this latest guidance covers the technical principles of the UPI the UPI data elements required for each OTC derivative asset class the identification of underliers and the UPI code structure.

Similarly, the Legal Entity Identifier Regulatory Oversight Committee (LEI ROC) is also engaged in harmonising the standard across jurisdictions.  Although the international work on the development and maintenance of global data standards would help reduce the reporting burden, regulators must keep in the mind the business impacts of their proposals.  As noted in a recent article in The Economist, obtaining LEIs from clients takes up a considerable amount of time for market participants and the “obligation for non-European firms to provide details of a trader, stretching even to date of birth and national-identity number, makes many queasy.”

With major revisions to EMIR on the horizon, and delicate multilateral negotiations on regulatory convergence between the EU and US currently underway, the markets should continue to expect significant amounts of regulatory uncertainty in the coming months.

Firms, however, are still expected to ensure that reports “are accurate and complete.  There should be constant monitoring and mistakes should be corrected” warned Ana Fernandes, a manager for the markets reporting team at the FCA, at the City & Financial Transaction and Trade Reporting conference on 17 October.

There will be many eyes on reporting data once it starts arriving, and quality expectations are high.  As Fernandes said, “we do expect firms to make their best efforts to be ready for January 3.  There has already been a delay.  If you have not started, you are late.  If you have, keep going“.

Work with your peers on RegTech tooling

Standards are only part of the picture, however, and they do not implement themselves.  RegTech is being deployed to help with reporting.  The FCA’s efforts focused on rulebook publishing and transformation to executable code.  Look for more details next month after the sprint has finished.

JWG’s Reporting and Reference Data Special Interest Group (RRDS), in partnership with leading solutions providers, trade associations, regulators and firms, is currently in the process of developing a Proof of Concept which will tackle this problem in a structured and constructive way – thereby aiding the regulator’s efforts to ease the reporting burden on market participants by facilitating a universal approach to linking reporting obligations to business flows.

JWG are hosting special interest group meetings for trade and transaction specialists.  Contact RRDS@jwg-it.eu if you would like to get involved.  You can also keep up to date with Reporting and Reference Data related news on our LinkedIn Group or follow us on Twitter and subscribe to our newsletter alerts.