In July 2017 we drew on RegDelta’s database of regulatory documents to estimate that MiFID and MiFID II accounted for 1.4m paragraphs of rules, guidance and policy. That figure drew gasps from the industry press but we were clear it was inevitably going to rise further. We have now calculated that just under 300,000 paragraphs have been added in the second half of 2017 – a slight pickup in pace since the first half of the year. 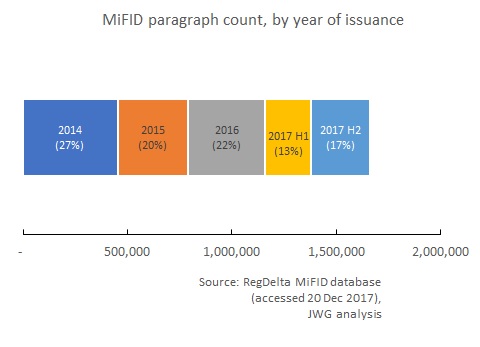 Why is the pile growing?

As we draw nearer the national implementation deadline for MiFID II and the effective date of MiFIR respectively, attention has turned to the minutiae of market conduct and compliance.

Consequently, a great deal of the substantive new material is guidance of one form or another; in addition to standalone guidance, ESMA has published over 500 pages of Q&As during the second half of 2017, most of these on market structures topics. It has also, as required by the Directive, provided a number of opinions on position limits for commodity contracts.

Brexit has added further to its workload. ESMA has had to provide opinions to support regulatory convergence, including continued alignment with MiFID, in the context of the UK’s decision to leave the European Union, on the subjects of secondary markets and the regulation of investment firms.

The Commission has added further to the MiFID document trove by adopting delegated regulations under ESMA mandates, for example on package orders; indirect clearing arrangements; authorisation of investment firms and notification of acquisitions; or conduct and information requirements for distributors of insurance-based investment products. It has also published in-depth reports into the liquidity and function of Europe’s corporate bond markets.

Finally, at the national level competent authorities are rushing to put finishing touches on their regimes – the UK’s FCA, for example, have been updating their supervisory sourcebook to account for the MiFID II passporting regime, and published CP17/19 on what they, very frankly, called “a small number of Handbook changes which we have not previously been able to consult upon.” 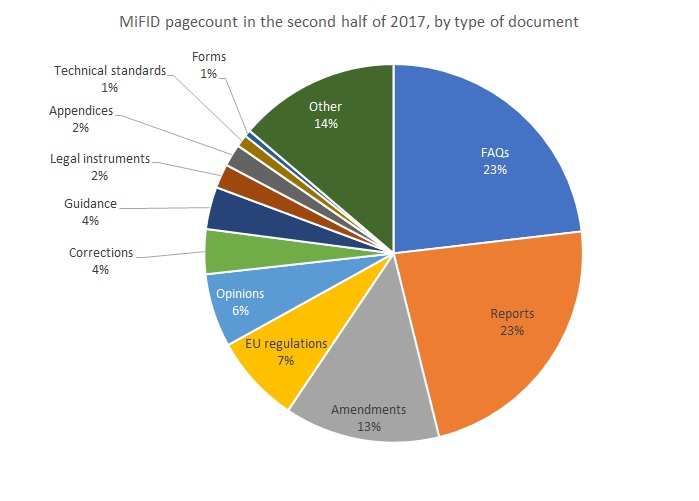 It’s not all about the regulators

As we head into January, the bulk of regulatory output on MiFIDII and MiFIR should now be behind us. However, the cascade of rule-making goes on after the regulators have completed their work.

Not included in our paragraph count, for example, are the efforts of other bodies, particularly exchanges, building MiFID II and MiFIR requirements into their own rulebooks: the focus inevitably is on reporting, information collection and exchange.

And obviously, our own work tracking the development of MiFID continues. The new year will see our first post-implementation stock-take of MiFID II. If you’d like to take a guess at the paragraph count for end June 2018, then leave a comment below!