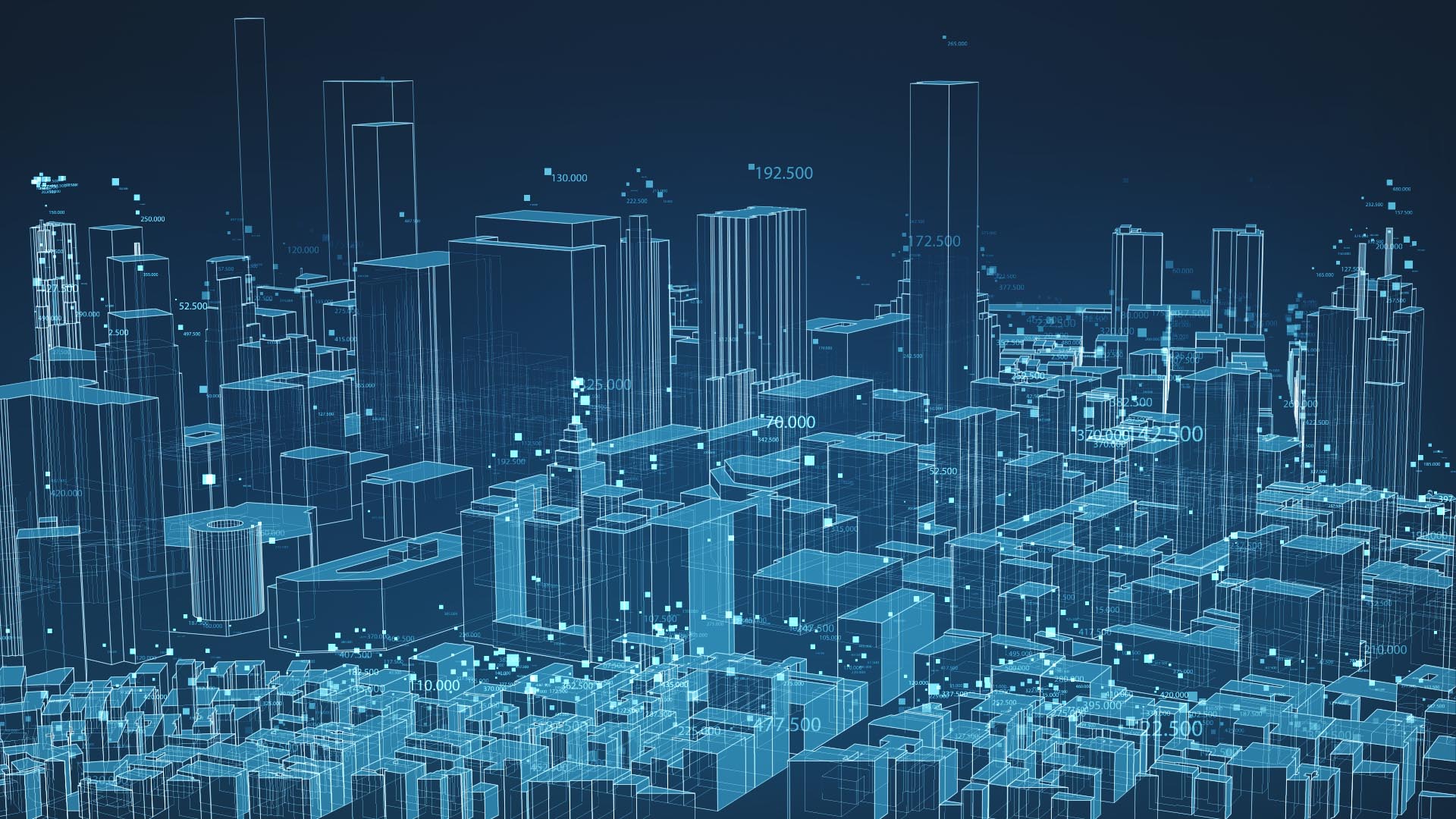 After a decade of data challenges, Regulators are now taking cautious steps towards new reporting technology. New reports issued this month show that DRR finally has traction and that demand for better solutions is high as the industry pinpoints which areas to deploy it.

We may finally be at a tipping point for both transactional and prudential data reporting. However, all eyes are on the supervisors.

The Financial Stability Board (FSB), which coordinates international regulatory and standards conversations issued a comprehensive report last week on SupTech and RegTech.

The authors conclude that “for authorities, the use of SupTech could improve oversight, surveillance and analytical capabilities, and generate real time indicators of risk to support forward looking, judgement based, supervision and policymaking.” The report concurs with the FCA’s Viability Assessment on Digital Regulatory Reporting (DRR)’s in January this year, concluding “poor quality reporting and/or delayed data can create challenges for authorities, in particular, if it affects the authorities’ ability to supervise and monitor.”

The FSB report recommends ongoing research into Digital Regulatory Reporting (DRR) and collaboration between technology providers, supervisors and regulated institutions. It also cautions, “strong governance and skilled human oversight is needed,” a conclusion that many RegTech experts would endorse.

Welcome international support for Europe and the UK

The FSB DRR report comes just as Europe and the UK are primed to make critical DRR decisions.

Since 2016, the FCA, Bank of England, European Commission and other regulators have been pioneering Digital Regulatory Reporting, the use of semantic technologies to link ambiguous legal obligations to a business view of reporting data and generate test cases & code which meets the requirements.

ISDA and the FCA/ BoE TechSprint proved DRR is achievable with the Common Domain Model (CDM) in 2019. The FCA have made a statement this month about their work with the Bank of England to develop new ways of writing and publishing instructions as part of its ongoing review of data collection.

This summer, the Bank of England and the EBA launched efforts to optimise supervisory reporting, while the EBA and ESCB looked at feasibility reports mandated by CRR2 on an integrated reporting system which are discussed more below.

Perhaps most importantly, last month, the European Commission published its Digital Finance Strategy, setting out its ambitions for widespread DRR. Gundars Ostrovskis, senior economist, digital finance at the European Commission, during a DG FISMA webinar this month stated that  the Commission will apply the machine readable obligation to other legislative amendments proposed to EU financial services legislation where public data disclosure is required. European supervisory authorities intend to develop a strategy on supervisory data in 2021, Ostrovskis said as he noted the EC PoC for EMIR Refit. This could have a massive impact on markets regulation like MiFID II and MAR which are currently in the consultation process.

In a very well timed intervention, a judging panel of private and public sector experts involved in the BIS Innovation Hub and Saudi G20 Presidency TechSprint awarded a global prize to a team of industry derivatives experts. This is welcome news to financial institutions who have been given until October 2022 for the global implementation of new CPMI and IOSCO standards to a new data model.

Using the Common Domain Model (CDM), which establishes a common digital representation of trade events and processes, ISDA and REGnosys developed a digital regulatory reporting pilot for the derivatives reporting regulations set by the Monetary Authority of Singapore (MAS). The solution enables reporting firms to access an executable code version of the regulatory requirements and to run trades through a reporting engine to validate the business logic, which can then be used consistently across the market.

In light of the UK Future of Finance Report’s finding that regulatory reporting costs UK banks £2 billion – £4.5 billion per year, the introduction of DRR could have a phenomenal impact.

Given that we have a mere 2 years to implement new derivatives reporting rules like EMIR Refit, the UK equivalent and CFTC 17 CFR Part 43, 45 has the potential to save the industry hundreds of millions just from the application of DRR for derivatives.

Next steps for DRR

As the FSB report concludes, “SupTech is a strategic priority for an increasing number of authorities. Based on a survey of FSB members, the majority of respondents had a SupTech, innovation or data strategy in place, with the use of such strategies growing significantly since 2016. The most common ‘use cases’ reported by authorities for SupTech tools were in the areas of regulatory reporting and data management.”

According to an FSB survey, authorities had up until 2016, continued to explore and introduce SupTech applications in areas such as regulatory reporting, data management and market surveillance. “However, since then, use cases have modestly reduced in these disciplines towards greater use cases in micro prudential and misconduct analysis.” The diagram below is from the FSB report. 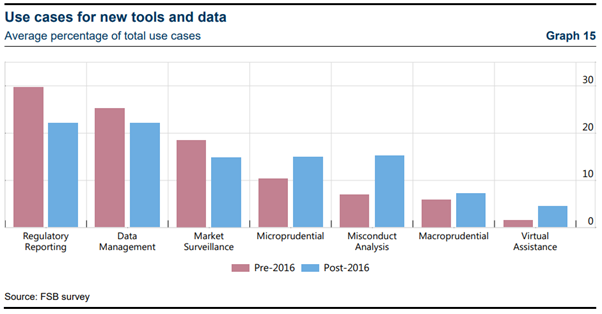 The FSB report continues, “Looking to the future, a range of themes emerged as areas which might benefit from further exploration and consideration by authorities as they develop their SupTech and RegTech strategies. These included the importance of senior management buy in, early engagement with users of tools (e.g. supervisors) and collaborations both between authorities, but also with technology vendors and regulated institutions. The potentially catalytic role of data standards and the importance of effective governance frameworks for the use of SupTech and RegTech were also emphasised.”

The prudential and statistical reporting frontier

In September 2020 the European System of Central Banks (ESCB) provided input to assist the European Banking Authority (EBA) with their report on an integrated reporting system for the collection of statistical, resolution and prudential data from banks. The input was mandated by the Capital Requirements Regulation (CRR 2).

This ESCB advocates data standardisation and the digitalisation of reporting requirements. On the subject of standard dictionaries it finds “The value added of a common data dictionary, containing the definitions of the reporting requirements from authorities, would be even greater if it was developed and maintained hand-in-hand with the BIRD, which defines the transformation rules to be applied to banks’ input data, before the data are transmitted to the authorities.”

“Indeed, both projects would provide crucial support to the banks’ reporting tasks by logically and methodologically bridging the gap between the authorities’ reporting requirements and the reporting agents’ internal databases.”

Though the ESCB report is silent on the tooling required to bridge the gap and how lessons learnt from the derivatives sector could be applied to prudential and statistical reporting, we could be on the verge of a breakthrough.

Think about it, one of the biggest risks for banking balance sheets has adopted a common way of modelling their data and linking it to regulatory reports. Meanwhile, those that are looking at the balance sheets are advocating comprehensive standards. Could we have a situation where the granular, trade by trade view could meet the ‘top down’ view of risk? If we do, DRR could help clarify granular reporting obligations, harmonise concepts and define data quality expectations for trade reports as well as prudential returns.

As with many SupTech challenges, however, this linkage is never straightforward.

On 12 November we will be hosting a debate with international and EU supervisors, reporting specialists and Vizor Software. Register without charge here.

We also want to know what you think about prudential DRR. Please take our 3 minute survey here