The European Commission has pushed ahead with digital regulatory reporting — which it views as a central workstream in its overall agenda to make financial services fit for the digital age — while UK regulators have sidelined similar initiatives.

“The overall objective here is of course to modernise and simplify [European Supervisory Authorities] ESAs’ reporting and ensure that we have the reporting system that delivers the necessary data that authorities actually need to fulfil the supervisory obligation, while at the same time minimising the aggregate reporting burden on all parties,” Dejmek Hack said.

She spoke at a workshop held earlier this week, “Unlocking the potential of machine-readable and executable reporting”, led jointly by DG FISMA and the European Securities and Markets Authority (ESMA). At the workshop, PwC presented the results of the DG FISMA-sponsored 150,000 euros proof of concept to demonstrate how MRER might work for European Market Infrastructure Regulation (EMIR) trade reporting.

“The MRER workshop was music to the ears of operations professionals. PwC’s report validates the solution to the problem that the industry has been working on for years — current reporting systems will not scale to meet the needs of an agile, data-driven economy without transforming regulation into trusted code that can be mapped to firms’ internal business systems,” said PJ Di Giammarino, chief executive at regulatory think-tank JWG.

Not an exercise, a programme

Dejmek Hack was clear that the MRER initiative was part of a bigger programme; not an experiment, but a building block.

“What we’re trying to do here is not an exercise for the purpose of exercise, but really trying to come to solutions that are helpful for competent authorities [and] are also helpful for industry itself — and to make your life easier, because that of course is what we in the end are trying to achieve here,” Dejmek Hack said.

MRER work is embedded with the rest of the EU digital agenda encompassing crypto-assets, cyber security, instant payments, open finance and revising the Payment Services Directive (PSD) to be fit for the digital age. It is a vital workstream in the regulatory change agenda aimed at streamlining supervisory reporting across financial services as regulations come up for review. Ultimately, ESAs will be empowered to take forward MRER and deliver machine-readable and executable rules.

“This whole focus on supervisory reporting is also very much to be seen in that changing context of a more and more digital and, as I said, more and more complex, financial services area,” she said.

The Financial Conduct Authority (FCA) and the Bank of England ran an MRER techsprint in 2017 setting out regulators’ ambitions to increase data quality and reporting accuracy while delivering a longer-term reduction in compliance costs.

“What we have now is a rule that’s been made machine-readable and that just configures the aggregation you do. You change the rule and that flows all the way through. We saw it happen. It took 10 to 12 seconds to change a rule and get a new data collection to happen at the other end,” said Oliver Burrows, the Bank’s former chief data officer, describing the techsprint’s achievements.

Nevertheless, developing digital regulatory reporting and a robo rulebook were among the recommendations made in Huw Van Steenis’ 2019 Future of Finance report. UK regulators accepted these recommendations.

The UK’s initial use cases — quarterly derivatives reporting, a commercial real estate database and financial resilience data collection — do not envision DRR, however. The use cases’ work on data standards is done in respect of the particular use case and not on a strategic level. That approach rather defeats the purpose of creating data standards and will not be useful in the event the UK restarts DRR work, reporting experts have said.

The FCA’s January 2020  DRR viability assessment found that turning rules into code was too hard. It declared there was “no current solution that met all requirements” and further work was required. “The best way to pursue the DRR vision is in small incremental steps which prove valuable to all each time,” it concluded.

A September 2020  paper from PA Consulting, commissioned by UK regulators, again found the process of turning rules into code was difficult, and that the necessary programming languages were not suited for such applications. Since that report, which many regtech experts regarded to be flawed in its methods, assessments and conclusions, DRR or MRER has dropped off UK regulators’ primary transformation agenda.

“We continue to research and analyse the business case for DRR with industry and the Bank of England. The complexity of implementing DRR has meant that we are taking incremental steps,” an FCA official said.

There is frustration, however, at UK regulators’ unwillingness to engage with and support these initiatives.

“Europe has validated both the technical approach and the business case. Most importantly, EU regulators are committing to play their part in what needs to be public/private sector collaboration. We are excited by the opportunity for the sector to define the right model but are wary that Europe will be challenged to solve this global problem alone. It’s time for other regulators to up their game and help the industry define a sustainable regulatory reporting architecture fit for today’s digital economy,” Di Giammarino said.

The FCA’s latest data strategy update makes no mention of MRER or DRR. It does, however, mention cost.

“This initiative is focused on helping the FCA and [Prudential Regulation Authority] PRA ‘gets the data it needs to fulfil its mission, at the lowest possible cost to industry’.” (emphasis the FCA’s)

Indeed, high initial costs and a skills gap are the biggest challenges to delivering MRER. That is why the EU’s work is proceeding methodically to create a system that will not become redundant, Dejmek Hack said.

“The MRER-code has to be developed and maintained, which leads to higher initial costs. The analysis in this report suggests that the potential benefits in the long run (with a number of assumptions), outweigh the initial and running costs,” PwC said in its report on the proof of concept.

The Commission will take feedback from the workshop and use it to develop a plan to take forward MRER.

One of the first next steps would be to align on the MRER architecture (i.e., the degree of adoption) and should include a separate workstream in the next MRER project to develop one vision on the optimal architectural design and the various roles and responsibilities during the next phase of the MRER project, the DG FISMA/ PwC paper said.

That work would include a project plan with milestones and workstreams, and cover topics in relation to legal/regulatory, governance, privacy and operations. The project team recommended bringing market participants into the project once these first steps were completed.

This article was published by Thomson Reuters on 21 October 2022

Want to know more? Come along to our 7th annual RegTech conference on November 9-10 to look ahead to the 2023 agenda. 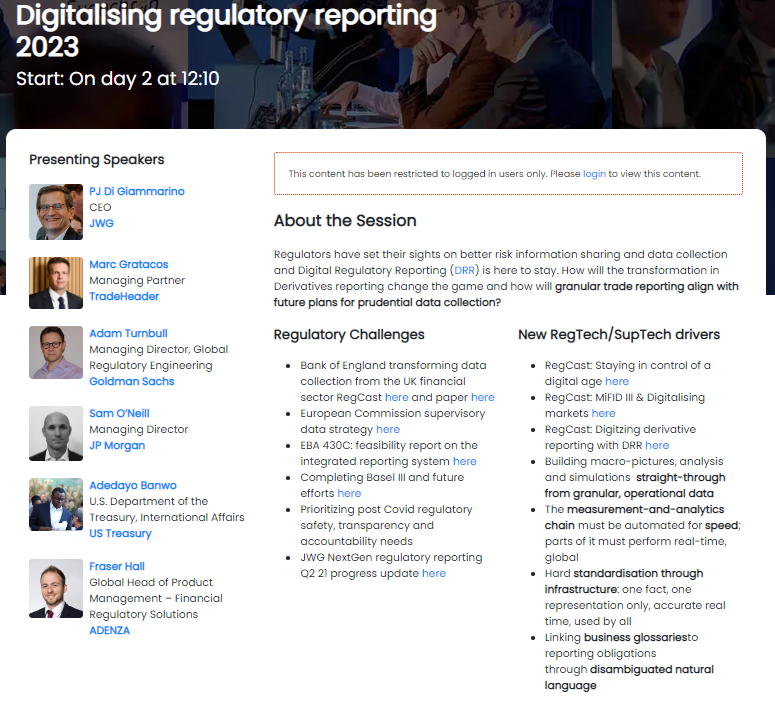