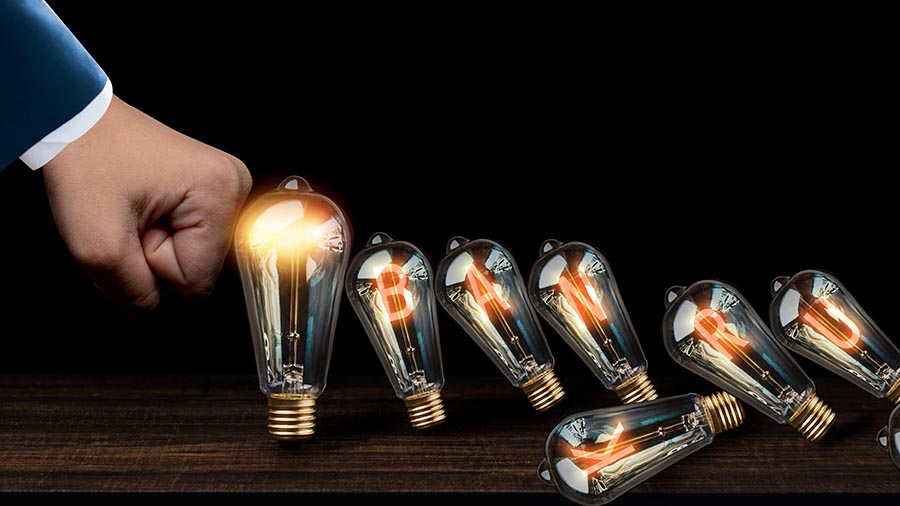 New JWG research has found supervisors to be focused on creating new standards for interpreting complex data needs in 2021 as the industry hits a tipping point for in its quest for digital standards that simplify complex regulatory reporting obligations. Global SupTech research calls for public and private sectors to align plans to scale DRR to meet new standards. This article explains what’s happening now, what’s in store this year and why you should care.

A Q4 2020 survey on Central Bank/ Prudential strategic regulatory priorities for regulatory reporting conducted by JWG with over 20 public and private sector participants found 2021 to be all about codifying the derivation logic applied to business transactions (i.e., operational data) which is understood to be sufficient for data points required by supervisors.

Our analysis shows that the SupTech vision is not all about rewriting rule books, providing code or test packs, rather it is providing a standard method to describe how the unambiguous data content required in each regulatory report is meant to be derived.

As illustrated in the chart below, participants identified top strategic priorities as:

The role of data standards

As highlighted in JWG’s November SupTech virtual roundtable hosted by Vizor, there has been an understanding for some time that interpretation of the success criteria for regulatory data obligations is a painful area which needs to be addressed but it has only been in the last few years that the industry has moved towards a better method of agreeing how to interpret reporting obligations.

Current ISO20022 standards, being implemented in the US and Europe for Derivatives reporting provide validation logic for the fields in the report (e.g., If A is True then B exists). These standards leave a wide gap for industry to fil with interpretation and ultimately results in many different versions of what ‘good data looks like.’

The example below shows how Domain Specific Language (DSL) is used to enrich the interpretation of the data itself (i.e., Field A is to be filled based on the role). This automatable derivation allows firms to use the ISDA Common Domain Model to enrich operational messages with information the regulator needs in an automated manner. 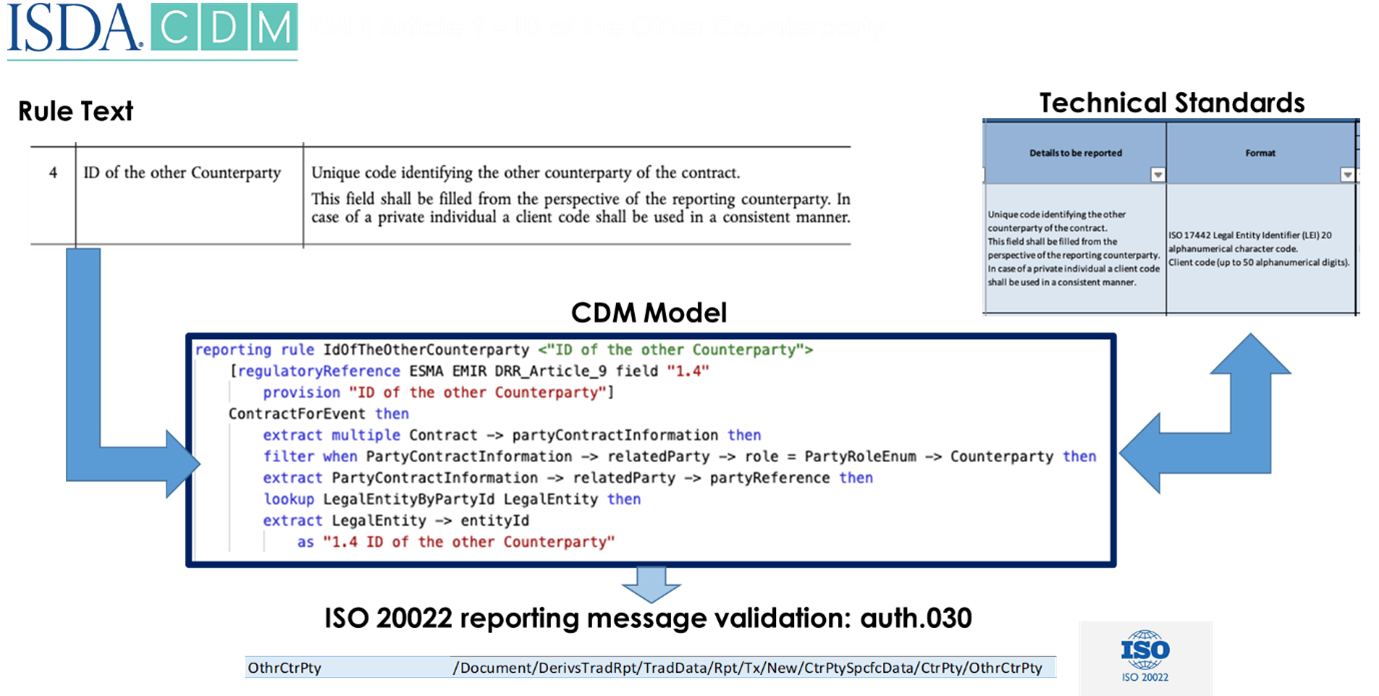 This explains why the top barriers are identified as getting humans and machines aligned on what good looks like, rather than the manipulation of the data itself via new repositories as illustrated in the answers to the question below.

The survey also reveals that the biggest challenges are getting alignment on global requirements and analytic capabilities, not the more technical APIs or data validation as shown in the answers to the question below.

This focus on global alignment of data needs comes as the industry has reached a tipping point fuelled by COVID, on top of a decade in which the industry built a patchwork of data feeds to meet new regulatory demands for transparency.

Over the last decade, the number, scope and complexity of prudential requirements have been substantially expanded. “In the case of the European Union, this post-GFC overhaul involved adopting more than 40 pieces of EU financial services legislation which generated a significant number of new, and mostly more granular, regulatory reporting requirements”, according to a new paper by the Bank of International Settlements: FSI Insights on policy implementation No 29 From data reporting to data-sharing: how far can SupTech and other innovations challenge the status quo of regulatory reporting?

The report also notes “Worsening economic conditions have raised credit, liquidity and operational concerns and the need for enhanced monitoring by authorities. At the same time, Covid-19 introduced serious limitations to on-site supervisory reviews and other face-to-face meetings.”

The paper, which surveys 10 financial authorities’ implementation of regulatory reporting innovations, found 40% to be implementing innovations in what the authors describe as “transformation rules”.  As illustrated in the chart below, these rules seek to bridge operational data sources like trading systems to the reports required by regulators. 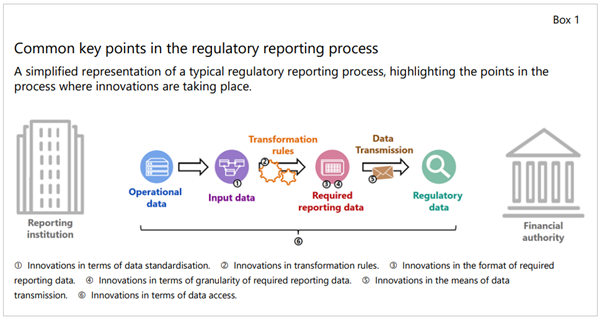 Source: FSI Insights on policy implementation No 29 From data reporting to data-sharing: December 2020

This chart illustrates the need for Digital Regulatory Reporting which we broadly consider to be the digitisation of reporting instructions, with reference to an agreed model to make current manual reporting processes more accurate, efficient and able to produce better transparency for supervisors.

We note that in the FSI paper the term ‘transformation’ is primarily talking about mathematical calculation (e.g., 2 x 3 = 6) + logic inference (e.g., If A and B, then C). A more common way of taking about these two concepts is ‘derivation’ (more on the Zachman framework and business rules here).  The question for the sector is: how do we agree the derivations if the way the need for information is currently described is in facts (i.e., data points)?

The DRR agenda looks to define a better way of contextualising the data points in the trade lifecycle. It is, in essence, about defining a common way for the public sector to look at private sector activity.

As in many ways the standards which define that activity are a public good, they need to be carefully constructed to be in line with supervisory needs in an open and fair manner. To achieve this, large regulators and global firms will need to work together with vendors, trade associations and standards bodies.

The top challenges which we need to address along the way are:

The BIS report concludes that the trend towards more granular and integrated reporting is very likely to continue with a focus on the larger firms and more international reporting requirements. “Larger financial institutions are expected to be subject to more data standardisation, especially for reporting areas with cross-border elements in which data interoperability is important (eg in the area of derivatives reporting).”

The authors find “Several initiatives towards data standardisation are already under way at the regional (particularly in Europe) and international level. FSB (2020), which calls for potential international collaboration in evaluating the scope for common data standards for relevant regulatory areas, provides a boost to these important initiatives.”

The report highlights the shift to granular reporting will raise the need for data standardisation ad urges authorities to address this challenge by standardising the input data to which financial institutions map their operational data before generating the required reports. ISDA’s Common Domain Model is identified as an emerging industry data standards for this purpose which would make it much easier for financial institutions to directly map their operational data to required reporting data with no or minimal processing.

This is a welcome conclusion to the dozens of stakeholders who have been involved in JWG’s Global Derivatives Digital Regulatory Reporting programme – more here.

We believe 2021to be the start of the next phase of the systemic reporting journey. We now have a much better understanding of the pitfalls of the current approach and glimmer of what the future could look like.

Will we need to work on removing ambiguity from legal text, data standards, data specification, rules specification, reporting instructions, use cases and other obstacles we have yet to wrestle with? Yes. But, unlike a decade ago, we have the right people at the table with a common objective and can solve these problems.

A year ago, JWG looked back at regulatory reporting since the crisis and noted that EU and UK regulators were taking a leading position to do something about the poor data quality hampering oversight efforts.

With data reporting fines at record highs, and a second round of G20 Derivatives reporting kicking off, senior management clearly listened. We are, therefore, not surprised by the SupTech focus on using technology to better define what good information looks like.

JWG’s experience in executing DRR programmes with major banks, suppliers, trade associations and regulators has shown that independent and professional collaboration is the only viable path forward.

We believe our Q4 SupTech survey findings align nicely to those of the BIS report which asserts there are 5 preconditions for a regulatory reporting initiative to succeed.

We couldn’t agree more with the conclusion that “These types of initiatives require strong consensus-building so that the resulting data standards have the full support of key stakeholders.” We look forward to working with the entire industry to prove and scale out the approach in 2021.

This article was published in partnership with Vizor Software

For more information on regulatory reporting:

To register for the next DRR virtual roundtable in March contact Corrina.stokes@jwg-it.eu